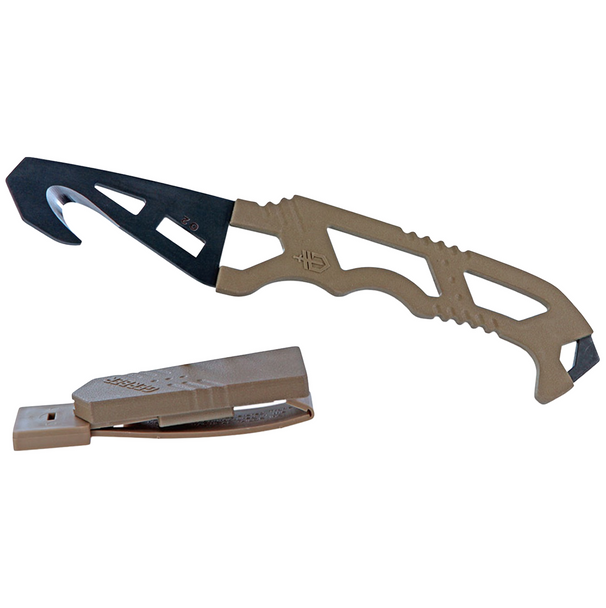 This featherweight knife is engineered for emergency situations: a hook knife that cuts seatbelts, cords, or rope. The elongated profile and blunt tip provide versatile use, never fearing to injure those being rescued. A glass-breaker pommel is part of the handle.

The Crisis Hook Knife is made to quickly and safely cut through anything from a seat belt to clothes and even cords, straps, or flex cuffs, making first responders’ work easier. When every elapsed moment counts against survival or safety, this featherweight 3 ounce knife can afford its user the critical additional window. The Crisis Hook Knife is proudly built in Portland, Oregon, USA.

GET AROUND HURDLES WITH EASE
When there’s no time to monkey around with a seat belt twisted or hung up by a vehicle that’s been crashed or exposed to an IED, clothing or field operative gear blocking access to a wound sustained by a casualty, or any sort of situation where boots, thick tape, or heavy cords or straps are preventing immediate medical attention, the operator handling a Crisis Hook Knife can eliminate the difficulty in seconds. Applied against the wounded area of a casualty, this tool’s blunt tip guards the blade, as opposed to a normal fixed-blade or folding knife. The user can tear directly into the fabric inhibiting access without fear of causing additional damage to the person being rescued.

ELONGATED PROFILE FOR IMPROVED APPLICATION
Gerber’s Crisis Hook Knife evolved from the smaller-profile Strap Cutter Knife used to get at life-threatening wounds rapidly and safely. The changes resulted in an elongated, easy-grip knife with a longer blade. The longer handle of the knife, unlike those of its competitors, consists of a rubber over-mold, giving its user a better grip to be utilized in a critical situation. An integrated O2 wrench for open and closure of the valve on an oxygen tank further increases the usefulness of this knife in life-saving situations. Its glass-breaker pommel, which includes a lanyard for tie-down, keeps obstructions from impeding rescuers in their goal of assisting and saving casualties.

LOCKED DOWN UNTIL REQUIRED
The Crisis Hook Knife keeps quiet until the situation demands otherwise. At a touch over 3 ounces, this knife rests in nearly weightless stealth from its malice clip, MOLLE-compatible, on a ballistic vest, backpack, or other MOLLE-equipped structure. Its ballistic molded plastic clip sheath is built with a friction lock for primary retention that prevents the knife from releasing and exposing its carrier to damage by the knife, or contributing to its loss.

MSRP:
Now: $129.99
Was: $299.95
Safety has never looked more menacing than in the S.A.H., or Safety Auto Hook. Its CPM S30V high carbon stainless steel blade and automatic hook take no chances when it is all on the line...

MSRP:
Now: $5.99
Was: $39.99
When the skies let loose and catch you out in the open, you need a lightweight survival poncho on hand. Without one, you might find yourself looking for protection inside the likes of a rotting camel...

MSRP:
Now: $29.98
Was: $49.98
Building off the success of our popular Remix series, the Remix Tactical Clip Folder marries a broad three inch serrated tanto blade with our iconic Remix handle design. It's a tactically inspired,...

MSRP:
Now: $43.98
Was: $63.00
This pocket knife is built for utility with a cleaver blade in a folding application. The FlatIron pocket folder features a robust 3.6-inch blade, a textured micarta handle, and a sturdy frame lock...

MSRP:
Now: $299.98
Was:
A sledgehammer. A battering ram. A pry bar. All three are essential breaching tools for operators who need to get through doors quickly. The Ding Dong combines these three tools into one tight...

MSRP:
Now: $15.95
Was:
With an innovative design that shields the cutting edge, this tool serves its purpose in emergency situations. The 420HC steel hook knife cuts through anything, the molded rubber grip and finger hole...

MSRP:
Now: $89.98
Was: $119.00
Down behind enemy lines? Left to fend for yourself? These are the scenarios that inspired the LMF II. Former military man Jeff Freeman led the charge to engineer this fearless new 10" survival knife...

MSRP:
Now: $129.99
Was: $299.95
Safety has never looked more menacing than in the S.A.H., or Safety Auto Hook. Its CPM S30V high carbon stainless steel blade and automatic hook take no chances when it is all on the line...

MSRP:
Now: $19.98
Was:
Zip! In an instant, you can slice through a seat belt in an emergency situation. Great cut-up too, for survival situations where clean cuts are needed. Its designed for swift, 1-handed operation...

MSRP:
Now: $9.98
Was: $22.95
ox Knives Military Division (FKMD) is a special brand of Fox Knives, which was established in 2005. Their range of goods focuses on operation purposes, which matches the special requests of police,...

MSRP:
Now: $159.99
Was:
Durable, fast to deploy, and rugged. This knife is a one-hand opening workhorse with a S30V tanto blade that can cut through anything; the black oxide coating and G-10 handle minimize slip to keep...

MSRP:
Now: $43.98
Was: $63.00
This pocket knife is built for utility with a cleaver blade in a folding application. The FlatIron pocket folder features a robust 3.6-inch blade, a textured micarta handle, and a sturdy frame lock...