Eberlestock Skycrane II Pack
(No reviews yet) Write a Review 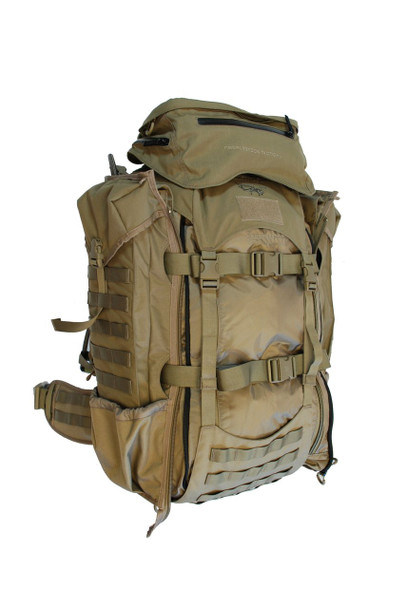 Brand:
Eberlestock
SKU:
Eberlestock-J79SP
UPC:
Availability:
Shipped from our or manufacturers warehouse, You will be notified of any delays. Your card will not be charged until product ships.
Weight:
1.00 LBS

Now: $449.00 - $489.00
Was:
We introduce G4M Operator Backpack by Eberlestock with the launch of what many will see as the ultimate scout/sniper pack, the G4M Operator. It represents everything that Eberlestock has learned...

Now: $429.00 - $499.00
Was:
The Eberlestock™ F4 Terminator Pack is an extremely versatile full-format load bearing pack. Optimized for the scout/sniper mission, it has a unique articulating rear interior wall that allows...

Now: $429.00
Was:
The V90 Battleship is a big, pack-all-you-can-carry-and-go-someplace backpack. It's a conventional class backpack with unconventional features. It is more fully detailed than most packs in its...

Now: $389.00
Was:
The V69 Destroyer is a conventional-class backpack with unconventional features. They are more fully detailed than most packs in this class. In the tradition of our focus on practical field use,...

Now: $299.00
Was:
This is simply a great all-around hunting pack. Whether carrying elk quarters or your camp, whether compact as a rifle toting daypack or bulked out to haul freight, you will find this to be a very...

Now: $329.00 - $349.00
Was:
The G2M was developed from the original GS05M Gunslinger. It has a slightly larger scabbard, to better accommodate weapons with larger cross-sections or bulky optics. The scabbard is wide at the...

Now: $399.00 - $429.00
Was:
The Phantom introduces a new type of tactical pack system; it's the first product that provides an integrated drag bag and backpack. It allows you to carry your heavy weapon in the backpack, either...

Now: $189.00
Was:
The Little Brother pack is a handy, stand-alone pack that's sold as part of our J79 Skycrane II system, and made to compliment our J51 Warhammer packs. Similar in concept to our H1 Mini Me, the G1...

Now: $299.00
Was:
After the enthusiastic response that we received for our J51 Warhammer, we decided to carry on in this new direction, and built the Jackhammer. The F52 has a blend of some of the most popular...

The J79 Skycrane II is a modular load bearing system consisting of three primary bags: the basic J79 pack, the pull-out G1 Little Brother pack, and a removable fanny/courier pack. The A3SS Tactical Weapon carrier, our other Side Scabbards, and a variety of components can be added to make a seamless pack system that can be selectively configured and optimized to a variety of missions. The basic J79 pack has a fully adjustable, robust internal aluminum/plastic frame system which can be optimized for direct-to-back carry or over-armor carry. Unique proprietary features enable the weapons carriers to be used singly or in combination, and to be mounted to either the J79 or G1 packs. Both the J79 and G1 are compatible with PRC-117 type radios and other modern battlefield communications gear. We made the J79 visually similar to our G4 Operator and F4 Terminator backpacks. This family of pack systems leads the way in modern military pack design, in which entire units can be fitted with packs suited to individual specialties. Because the packs have similar visual characteristics, identification of snipers and other specialist personnel will be more difficult for the enemy. The J79 is the second-generation Skycrane, developed from the J263 Skycrane I. The J263 was extremely well liked by soldiers in the field, who found it to be the best platform available for carrying modern heavy-class sniper rifles.