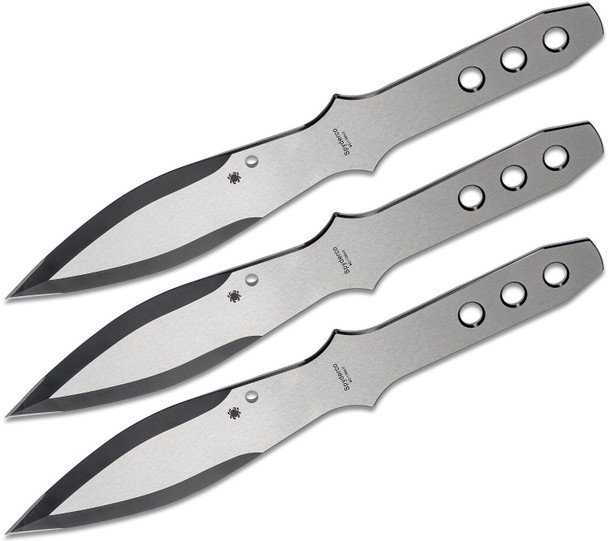 Spyderco's SpyderThrower series of throwing knives has a long, fascinating history that began with a man named Harald Moeller. Born and raised in Germany, Moeller worked as a professional tool-and-die maker there before immigrating to Canada in 1956. Although he continued to work in various machine shops and even taught his trade to apprentices at Canada's Department of National Defence, Moeller's lifelong infatuation with knives ultimately lured him away to pursue a career as a knifemaker.

Moeller's well-established habits of careful planning and meticulous attention to detail—as well as his in-depth knowledge of industrial design and metallurgy—served him extremely well in his new vocation. He quickly established himself as one of Canada's premier custom knifemakers and soon attracted a worldwide following of customers. As his career progressed, he also received countless awards at custom knife shows for his innovative designs and peerless craftsmanship.

Although Moeller focused primarily on hunting, camping, and investment-quality collector's knives, his customers frequently asked him about throwing knives. He had never made a knife specifically designed for the sport, but his intense passion for knives included a healthy curiosity about throwers, so he decided to give it a try. Moeller had purchased a number of commercial throwing knives in his youth, but never had much success throwing them. He had also read several books on the topic, but also felt they lacked sufficient detail to really understand throwing knife design. Inspired by his customers' requests and his own curiosity—and confident there was plenty of room for improvement in the field—Moeller decided to start his research and development from scratch.

He began by purchasing more factory-made throwing knives and pooling his collection with that of a friend who was an avid knife thrower. With many different styles of knives at their disposal, they spent many hours throwing and analyzing them, carefully noting the performance of each. By focusing on the shortcomings that many of the knives shared, they created a tangible list of problems Moeller needed to overcome with his design. In general, they found that most throwers were too light, their handles did not allow a smooth release, they were not properly balanced, their handle scales would loosen or break, and they were vulnerable to rust. Armed with this list of challenges, Moeller set out to design a throwing knife that overcame them all.

Beginning with a hand-drawn sketch and progressing through numerous prototypes, Moeller created and refined a throwing knife design he called the "Viper." Meticulously crafted from thick, corrosion-resistant stainless steel, the Viper offered the perfect weight and mass to throw with superior control and "stick" consistently in a target. Its one-piece construction was devoid of scales that could break or loosen, and its straight handle design and symmetrical blade bevels optimized it for what Moeller called his "vertical blade" concept. When thrown by the handle with the plane of the blade vertical, the handle's straight shape allowed a smooth release and the wedge-like taper of the blade bevels enabled it to stick with a greater margin of error—nearly 170 degrees. The Viper was also perfectly center balanced to allow it to spin smoothly and consistently in flight. Collectively, these design features made the Viper extremely easy and fun to throw.

Moeller's original Viper design was 12.50 inches in length. Inspired by its impressive performance, he decided to try scaling it down to smaller sizes. Amazingly, he was able to fine-tune the design to create a 10.50 inch version and an 8.50 inch version, both of which threw and stuck consistently at exactly the same distance, making one 360-degree revolution at about 13.50 feet.

When Moeller began making and selling his Viper throwing knives, the response from his customers was immediate. They absolutely loved them. To help promote the design and the sport of knife throwing, Moeller wrote and published a book,

, which told the story of the Viper's evolution and provided step-by-step instruction in his preferred method of throwing. He also set up throwing ranges at Canadian hunting shows and personally introduced hundreds of people to the joy of knife throwing.

One of the people who was most impressed with the Viper throwers was Spyderco founder Sal Glesser, who regularly visited with Moeller at the annual Oregon Knife Collector's Show. A lifelong knife thrower, Sal knew an exceptional throwing knife when he saw one. In fact, whenever show visitors asked Sal about throwing knives, he would sing the praises of the Viper design and simply point them towards Moeller's table.

In 2015, Moeller realized that his efforts to craft custom-made Vipers would never fully satisfy market demand. Sal, who was receiving more and more questions about throwing knives from Spyderco fans, asked if Moeller would be willing to license the Viper designs to be commercially made. Moeller enthusiastically agreed and a collaboration was born. Because another manufacturer had trademarked the name "Viper" for commercial use, the design's name had to be changed. The "SpyderThrower" seemed a natural choice.

Just as "a rose by any other name is still a rose," every Spyderco SpyderThrower has the heart and soul of a Harald Moeller Viper. Painstakingly machined from corrosion-resistant 8Cr13MoV stainless steel and spring tempered for toughness, SpyderThrowers feature a contrasting two-toned black-oxide coating and satin finish. Perfectly weighted and precisely center balanced, they throw equally well by the blade or the handle for half or full-spin throws. Like Moeller's original Vipers, they are available in three different sizes that remarkably share the exact same throwing characteristics and distances.

To maximize the fun of throwing and easily allow minor technique adjustments between throws, SpyderThrowers are sold in sets of three knives of the same size. Every set comes complete with a beautifully crafted three-tiered leather belt sheath. Made in Spain from premium cowhide, it allows all three knives to be carried or stored together and staggers the heights of the handles so they can be easily drawn one at a time.

Finally, to ensure that SpyderThrower owners can appreciate the deep history behind their knives, we revised and updated Harald Moeller's original instructional book to create Knife Throwing: The Knives and Throwing Technique of Harald Moeller. This comprehensive book is included with every set of SpyderThrowers. It includes step-by-step instruction in Moeller's approach to knife throwing and will enable even novice throwers to start throwing and sticking their knives in no time.

Spyderco is extremely honored and grateful for the opportunity to translate Harald Moeller's amazing Vipers into the SpyderThrower family of throwing knives. A direct reflection of his exceptional knifemaking skills and his relentless spirit of innovation, Moeller's groundbreaking designs are truly in a class by themselves.

MSRP:
Now: $396.00
Was:
The Spyderco Autonomy was developed in response to a request from the U.S. Coast Guard for a cutting tool that would meet the demanding mission requirements of their rescue swimmers. They needed a...

MSRP:
Now: $136.50
Was:
Spyderco has the Endura4 Lightweight with fiberglass reinforced nylon handles that are molded with Bi-Directional Texturing for preferred traction and improved ergonomics with the Emerson Opener for...

MSRP:
Now: $84.00
Was:
For decades, Canadian custom knifemaker Harald Moeller’s throwing knives have been regarded as some of the finest in the world. The product of Moeller’s uncompromising quest to develop the perfect...

MSRP:
Now: $188.00
Was:
The Harpy from Spyderco like the Harpy eagle's claw is shaped for controlled pulling cuts. The stainless hawkbill blade is fully serrated for the cutting of fibrous materials like rope, belts, etc...

MSRP:
Now: $196.00
Was:
Meaning "prepared" or "ready" in Latin, the Parata is a dramatically styled folding knife that delivers incredible performance in a refreshingly unorthodox package. Its stunning blade is crafted from...

MSRP:
Now: $225.50
Was:
The Lil’ Native distills all the key qualities of the iconic Native® model into a compact, easy-to-carry gentleman’s folder with a 2.5-inch blade. This version further elevates...

MSRP:
Now: $109.40
Was: $157.21
The Microflip features Hogue's robust button lock mechanism along with their patent-pending blade retention device. This unique instrument retains the blade in the closed position allowing the user...

MSRP:
Now: $47.94
Was: $81.99
It's drop forged, like the other knives in this series from a single piece of steel, has twin razor sharp edges with a needle point, an integral guard, and a finger ring. Its grip is sized for nearly...

MSRP:
Now: $159.50
Was:
It's been speculated the sheepfoot shaped blade originated with mariners who found the rounded tip especially beneficial when the knife was accidentally dropped (think working on a ship in pitching...

MSRP:
Now: $102.56
Was: $148.71
Hogue Knives are built around precise engineering and stringent manufacturing practices that equal exceptional performance. The team is lead by Master Toolmaker Jim Bruhns and his partner Neil Hogue...

MSRP:
Now: $31.87
Was: $64.99
The Cold Steel Kobun is a lightweight knife that takes its name from the Japanese underworld, where the word "Kobun" is sometimes used as an indicator of rank that suggests the word "soldier"in, or...

MSRP:
Now: $71.50
Was:
An unparalleled combination of affordability and performance, the Tenacious is the go-to choice of countless savvy knife users. This lightweight version raises the bar even further with...

MSRP:
Now: $109.40
Was: $157.21
The Microflip features Hogue's robust button lock mechanism along with their patent-pending blade retention device. This unique instrument retains the blade in the closed position allowing the user...

MSRP:
Now: $251.00
Was:
Seasoned Spyderco enthusiasts know that Spyderco model numbers are sequential to the chronological development of the knives they represent. With very rare exceptions, like the C06 Tusk, the lower...